The Men's Singles Finals of the Liebherr 2017 World Championship in Düsseldorf was one of the most thrilling finals ever in the history of the World Championships. Ma Long beat Fan Zhendong in the narrowest of the margins, winning 12-10 in the seventh. But what exactly was Ma Long's strategy that earned him his second world championship title?

According to the article MA LONG – FAN ZHENDONG: THE BEST FINAL EVER published on the website www.zoomtt.com, Ma Long’s strategy was to allow Fan Zhendong to initiate attack and produce powerful counter attacks on it. However,  it is interesting to note that Ma Long won only four more points than Fan Zhendong to win the world title, thus a thorough analysis of the match will break down further details on his strengths and strategies that helped him win the match.

Check out the analysis as per the article:

Was it a match or a chess game? After so many previous battles and hundreds (?) of hours of training together, nothing unexpected would happen. Ma Long’s words after the match agree on this:

“I feel very happy to won, feel I was a bit lucky this time, I am apologetic to Fan Zhendong, but the future belongs to him; mentally I was not certain on how to prepare for the game” – Ma Long

Fan Zhendong started the match as usual: trying to take the point initiative using his backhand flick and using powerful attacks right after that. Five and four mistakes by Ma Long, with forehand and backhand respectively, made him lose the first set.

In the second set, Ma Long clearly let Fan Zhendong attack, controlling the short game with well placed pushes. Fan’s backhand flicks did not stop happening, but this time much less harmful than in the previous set, which allowed Ma Long to counterattack. With 8-6 on the scoreboard, Ma Long took advantage of this to connect two unstoppable forehand topspins that sentenced the set. A final 11-6 that set 1-1 in the match score.

Fan Zhendong anticipated difficult times to come if he kept playing that way, so he tried to change several things in the third set. First, he switched from inversed pendulum to a simple pendulum serve. Then, he used more forehand pushes close to the net in order to wait for better attacking opportunities, instead of always flicking the first ball. Apart from that, he seeked for Ma Long’s forehand. None of his new tactics seemed to work, as Ma Long counteracted them with many rythm changes and three forehand topspin winners that made an easy set for him: 11-3.

The fourth set of the match was the third in a row for Ma Long, as we got an 11-8 result to reach 3-1 in the scoreboard. A masterclass of tactics, as he used several weapons that put Fan Zhendong in trouble. An example of this happened with 4-2: first a backhand chop-block and then a slow forehand topspin that would mean a 6-2. However, Fan Zhendong kept trusting his style, flicking and looking for backhand to backhand exchanges, which he usually controls. When 6-4 for Ma Long, he used his timeout to find some rest and change something to prevent the comeback. So he did, pivoting three times, attacking with his forehand and stopping Fan’s domination.

In the fifth set, Fan Zhendong clearly changed his plan again. He continuously attacked to Ma Long’s right corner of the table, who made five mistakes with his forehand topspin and resulted in an easy set for his opponent: 5-11.

The sixth set continued in the same fashion, but Ma Long tried some changes: the first time in the match he flicked with his backhand to take the initiative. Nonetheless, Fan Zhendong smashed him with parallel backhand shots, like the one he used to finish the set 7-11 and reach the seventh and last.

Fan Zhendong’s beginning of the seventh set, 2-0 with two parallel and pivoted forehand topspins did not scare Ma Long. He made some spin variations when pushing, that forced unusual mistakes in Fan when flicking with his backhand. Nevertheless, he kept getting points at the forehand side of Ma Long with strong attacks that he could not stop. With 7-7, two similar spinny backhand flicks by Fan Zhendong were not blocked properly by Ma Long, and a 7-9 was set. In that crucial situation, Ma Long trusted his forehand topspin to attack in the first point and then forced a mistake on Fan Zhendong with a strong push in the second one. After a backhand-to-backhand exchange, the first match ball was reached with 10-9 for Ma Long.

The latter made a long serve and pivoted to attack with his forehand. It did not work though, as Fan counteracted it with a troublemaker parallel block and 10-10 was reached to delight the 8000 spectators in Düsseldorf. The following point was one more unusual backhand flick mistake by Fan Zhendong, and one more match and championship ball for Ma Long. Once again in this situation, he served long and pivoted to attack with his forehand. However, the result was different this time, as Fan could not reach the ball and a final 12-10 demolished his wishes of becoming the 2017 World Champion.

The match highlights video from the official ITTF channel follows:

Let’s first see some general stats about the match:

Although Ma Long won the match and got 4 more points in total, he only had 8 winners, while Fan Zhendong’s power prevailed in this aspect with 13 winners. However, this also made him make more mistakes, 54 vs 45,  which explains the final result. Ma Long’s regularity is also proved with a winning streak of 8 points, which he achieved from 5-3 in the second set, that would finish 11-3, to 2-0 in the third.

Regarding the rally length, we have this evolution:

As can be seen, the line has many spikes, which reflects the amount of rythm changes the match had. The average rally length was 5.6 hits per point, which compared to the Women’s Final’s that was 7.6, denotes the difference of both categories in the point duration. The first set is the one with the lowest average, 4.9, while the fifth has the highest: 6.7.

Did any of the players control the longest rallies of the match? Let’s take a look at it: 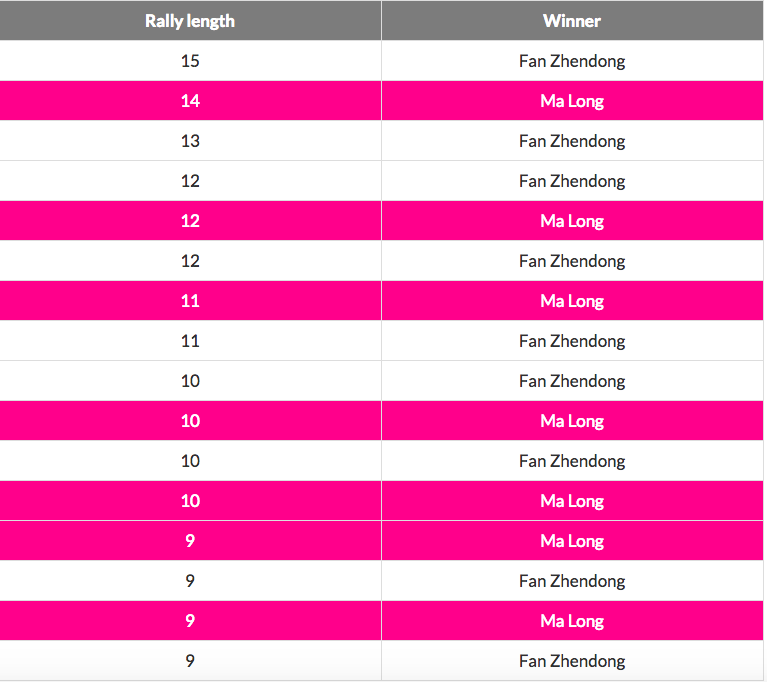 Although Fan Zhendong won 4 out of the 6 longest rallies of the match, the numbers get very similar when considering the top 16.

Regarding the kind of shots the players used during the match, we have:

This graph explains the difference that both players have in their style. While both of them have a very similar amount of backhand and forehand topspins, there are two shots which strongly differ: the forehand push and the backhand flick. Ma Long only flicked short balls with his backhand five times in the match, while Fan did it 75 times. What did Ma Long do when returning serves? He used the forehand push 73 times, with different spins and placements to make Fan Zhendong attack in a softer way and counterattack the next ball.

The following video shows how most of the points of the match developed, following a similar pattern:

Let’s see now whether this playing style difference affected the match result comparing the strokes’ efficiency of each player:

As aforementioned, Ma Long lost many points when Fan Zhendong attacked to his forehand side of the table. However, the highest amount of winners – seven – also come from this stroke. The backhand-to-backhand rallies were the most repeated sequence during the match, and that’s why so many mistakes happened with Ma Long’s backhand topspins and blocks. This exposes one of his weaknesses compared to Fan Zhendong: the proportion of backhand winners is only 1.3%, while the forehand’s is 9.7%.

Fan Zhendong’s amount of mistakes is fairly divided between forehand and backhand topspins, backhand flicks and backhand blocks. One subtle aspect is hidden in the stats: he had 10 backhand flick mistakes during the whole match, but 3 of them happened in the worst moment: the seventh set.

Finally, let’s analyze the importance of attacking first in the match. If we check how often did the server win the point, we realize that the service is not a big advantage in top level table tennis nowadays. Ma Long performed 62 services during the match, winning exactly 50% of them: 31. Fan Zhendong won 29 of his services and lost 33.

Was there any difference if we consider the amount of times the first player attacking won the point in the end?

There is a huge gap between both players in the amount of times that each of them iniciated the attacking strokes. However, in both cases, the percentage of won points is almost the same. It is interesting that attacking first meant losing the point more often. This may explain Ma Long’s strategy letting Fan Zhendong attack and waiting to counterattack.

The match result was very tight. Nonetheless, it was only in the seventh set that they reached a 10-10 result, as the previous sets were resolved in a quicker way. With a low rally average, most of the points happened close to the table, and that prevented Fan Zhendong from exhibiting his magnificent footwork and made many mistakes in the backhand-to-backhand exchange. On the other hand, Ma Long struggled with his forehand when Fan Zhendong repeated several parallel shots to that area of the table, and that allowed him to come back a 1-3 down on the set scoreboard.

The seventh and decisive set brought several unusual mistakes by Fan Zhendong, who could not take advantage of a leading 7-9 and ended up losing the match. Ma Long described it as being «lucky», but his expertise in this kind of situations  was well proved when he finished the match with a surprising forehand parallel topspin that gave him his second World Championship in a row.

IT IS ABOUT TIME

Ma Long cheered and celebrated his victory more than we had ever seen before. He still casts a long shadow on the table tennis scene, but time passes and his reign is closer to finish. That is why Fan Zhendong regreated so much after the match, he will now have to wait two more years for the next World Championships to have one more chance to defeat him at a big event.

New faces like Lin Gaoyuan or Tomokazu Harimoto will for sure try to surpass Ma Long and Fan Zhendong. We might not be able to enjoy such a match for a long time. However, this final will always be remembered as one of the best of the World Championships history.