An hour before with Zhang Jike

Find out what training Zhang Jike is up to an hour before his matches at Messe Düsseldorf.

It’s exactly one hour and two minutes before the Zhang Jike’s match against Austrian Robert Gardos.

Heading to the practice hall is China’s national men’s coach Qin Zhijian. He carries a red bag. Red is a lucky colour in China, and it doesn’t hurt to be a little superstitious.

Qin arrives at the hall to find Zhang Jike on the court with his practice partner Yan An.

Inside the bag? Food!

Zhang Jike has been on the court for a while, but he takes a break to take a bite to eat.

After eating it is back to training.

First on the practice agenda: Zhang makes banana backhand flick, and then jumps back to play a  backhand. Yan An catches the ball and repeats. Two shots and that’s it. After a while a few more backhands are added to the rally, but that is maybe ten minutes later.

Next up, Yan spreads the ball across Zhang’s backhand half, who only plays a backhand if it touches the centre line. It’s at this moment that coach Qin steps in to make some adjustment to Zhang’s technique, which was basically to suck his gut in and get it away from the ball.

At 18:30 some special guests arrive; two members from the Zhang Jike Fan Club. They stand outside the court filming their hero as he trains, both uncontrollably grinning.

The service is eventually removed and then it’s on to Yan spreading the ball over the entire backhand half; Zhang only playing the forehand if it hits the centre line.

Next it is Yan’s turn to make the backhand flick. Zhang serves, Yan flicks and Zhang counters with his backhand. But that’s it. No rally. Just serve, counter, repeat.

Don’t be fooled, the best prepare for their match in the simplest means; there are no trade secrets to be found.

How simple can you get? Well how about making short returns. Zhang now moves on to just that. No complicated routines, no free play, just pushing services short.

One more shot is added for the final practice. Zhang now pushes half long, Yan spins the ball, Zhang counters with his forehand.  No rally follows.

This continues until 18:55 when the bat is returned to its case and the sports bag is picked up.

Zhang and Qin leave the practice hall together and head towards the Call Area for ball selection.

Despite the absence of long rallies, Zhang leaves the court sweating. The intensity and concentration he puts in to every ball has turned the simple practices in to a full blown workout.

The preparation worked. Zhang Jike saw off Robert Gardos 4-2 and moved on to the next round. 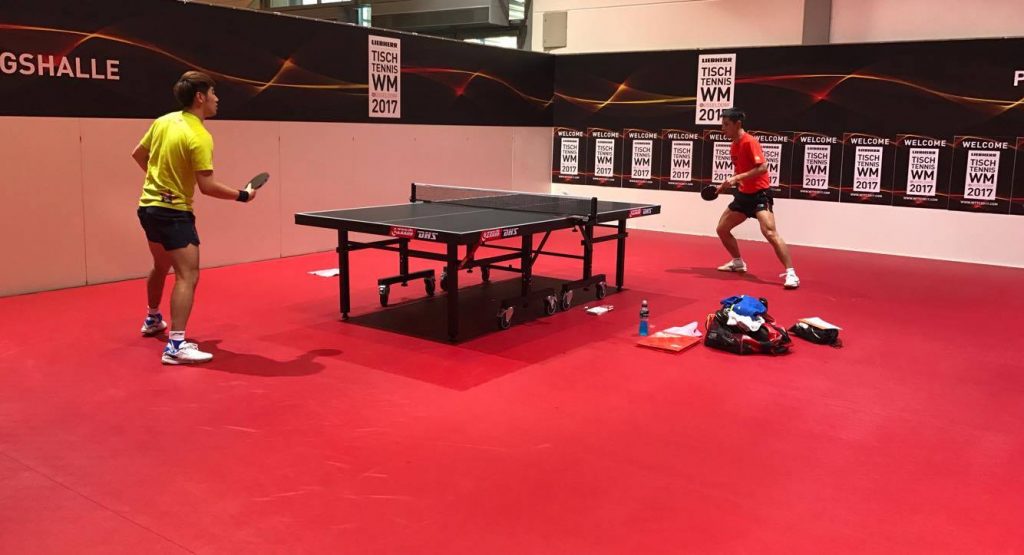