Action has officially commenced at the Liebherr 2017 World Championships in Düsseldorf, as Monday 29th May marked the opening day of the big event.

The tournament opened with qualification matches from all five categories, as the battle for the main draw commenced.

One of the big shocks of the day came in the Women’s Singles qualifying group stage, as Puerto Rico’s Melanie Díaz suffered an unexpected defeat in her opening match.

Regina Kim was the player who took the headlines, as the player from Uzbekistan claimed back-to-back victories to finish top of her qualifying group.

There was another upset involving an Uzbekistan competitor: but this time it was disappointment for the country as Olga Kim lost out to Estonia’s Valeria Petrova (7-11, 8-11, 11-9, 6-11, 3-11), with the latter player finishing top of the qualifying group.

China is one of the most powerful forces in the sport, and as expected, the country’s one representative in the Women’s Singles qualifying group stage Mu Zi delivered two strong performances.

Australian representatives for the Men’s Singles competition enjoyed a positive opening day in Düsseldorf, after all three of the country’s competitors ended the day without a defeat to their names.

Another Australian who is leading a qualifying group is Kane Townsend, who pulled off an amazing recovery to defeat Macau’s Cheong Chi Chang in the deciding game (5-11, 11-8, 9-11, 10-12, 11-8, 11-3, 11-8). The third player representing Australia, Heming Hu was awarded a walkover victory against Jose De Leon.

Similarly, there was plenty to cheer about for Egypt in the Men’s Singles competition, with the country’s contestants all registering perfect results.

There are a good number of Latin American stars who have made promising starts to the qualifying group stage, with Cuba’s Andy Pereira, Paraguay’s Alejandro Toranzos and Chile’s Felipe Olivares all remaining unbeaten after day one action.

The Mixed Doubles qualification battle concluded on day one in Düsseldorf, after three rounds of preliminary qualifying stages were played out.

Six matches required the full five game distance in the final preliminary qualifying round as spectators were treated to a tense fight. 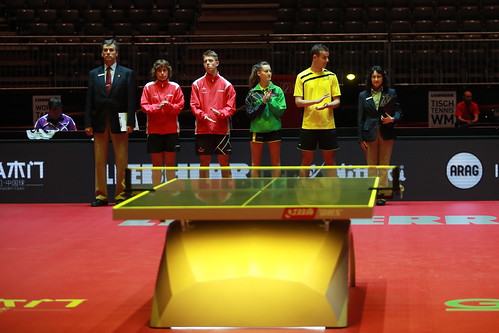