Wednesday 15th March marks the first day of the qualification tournament for the 2017 ITTF Challenge Belgosstrakh Belarus Open in Minsk and the opening round matches of the Men's Singles qualifying group stage have seen Polish contestants get off to a strong start at the Palace of Tennis venue.

Six players representing Poland registered victories in their opening encounters including Robert Floras, who began his Group 1 campaign with a strong performance.

One of the surprise outcomes came courtesy of another Polish athlete as Patryk Chojnowski overcame Guillermo Martinez of Spain (11-6, 13-15, 11-7, 11-6, 9-11, 11-5) in their Group 4 encounter, while Tomasz Kotowski, Patryk Zatowka and Marek Badowski all posted victories over Belarusian opposition in their respective qualifying groups.

The other contestant from Poland to triumph was Tomasz Lewandowski, who sits top of Group 22 following his positive result against Ukraine’s Bohdan Sinkevych (11-6, 11-7, 11-8, 11-5).

There was a mixed start to the qualification tournament for the Czech Republic’s competitors, as Jiri Martinko and Tomas Polansky picked up two very different results.

“In the first match I needed some time to get into shape and catch the game because I’d never played with my opponent before and didn’t known what to expect from him. I won two games, got the rhythm and suddenly lost one. Despite this, I felt my advantage and finished the game in my favor. I want to get as far as I can in his tournament, up to the medals, and I’ll do my best for it”, Tomas Polanski.

Alongside Dmitry Foreitorov’s stunning comeback victory there were more positive outcomes for Belarusian table tennis players, and Aliaksandr Khanin was one of the home players to excel.

“I started the match decisively and led 3-0, but in the fourth game Petr (Fedotov) took more confidence in his play and increased the number of enduring rallies. I should say that my opponent played well in the endings of games four and five. With the game score at 3-2 I led 10-8 but lost two points in a row. Nonetheless, at 10-10 I finished the match steadily with 12-10 in the final game. I don’t want to plan anything special for this tournament, my main goal is to win as many rounds as possible”, Aliaksandr Khanin. 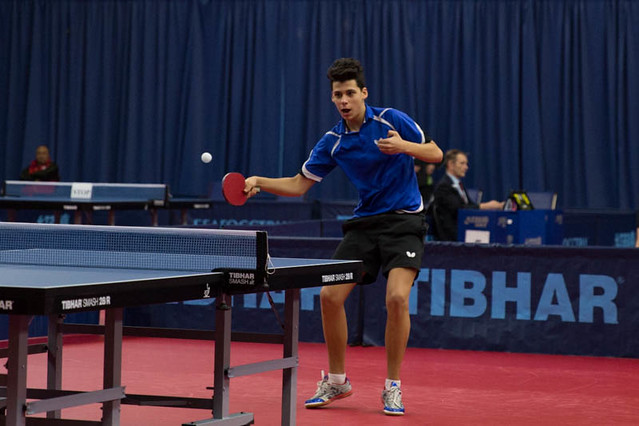