Play concluded in the table tennis events at the Rio 2016 Olympic Games on Wednesday 17th August; in addition to players and officials being welcomed home, eyes now turn to the legacy of what proved a most successful gathering.

Organised by the Dutch National Olympic, the Ginásio Experimental Olímpico (GEO) Schools project was conducted during the Games, focusing on schools located on the edge of the Favelas, any area in the city that has gained a reputation for poverty and crime.

The initiative is part of a wider programme organised by the Brazilian Table Tennis Confederation.

“We give tables, balls, rackets; we train the teachers, the city pays the teachers; in the past three years some 50 schools, 4,000 students have benefitted”, said Alaor Azevedo, the President of the Brazilian Table Tennis Confederation.

“From September this year we will start in 10 schools for children aged six to ten years”, added Alaor Azevedo. “Gradually we will detect the talents and provide a higher level of equipment and increase the level of coaching.”

Leading the GEO Schools project was Trinko Keen, a former high class international, who is no stranger to the Olympic Games. He competed in three consecutive Olympic Games being present in Atlanta, Sydney and Athens; he sees sport as a way to build the character of children, being supportive of his country’s “Table Tennis Kids” programme.

“Sports is a central activity of the day; the children eat and study in the schools; the GEO schools being an initiative of the Rio municipality and the Brazilian government”, explained Trinko Keen. “The Dutch National Olympic Committee was so impressed by the work these schools are doing, they decided three years ago to start a project to bring Dutch top athletes from different sports to the schools to train the kids, inspire them with stories about sports and dreams and the way to get to the top.” 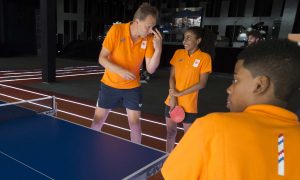 Furthermore, not only was Trinko Keen returning to the Olympic Games theatre; he was returning to Rio de Janeiro.

“After I went to the schools last November, I was really touched by the children and the great work the trainers and teachers deliver in training the kids and helping them against the odds to give them a better future”, said Trinko Keen, who on his return to Europe sought assistance from major table tennis manufacturers.”

The support provided the backbone of success.

“When the coaches and children saw what the companies had given them, they became really emotional”, added Trinko Keen “I am happy that I was able to show that the table tennis world cares about these children.”

Sport provides an excellent education; the vast majority of schoolchildren who become involved in sport, are rarely in trouble in their teenage years and progress to enjoy fruitful lives.

“I truly believe that sport can change the faith of these children, in sports they learn that when you invest in your training you can reach something; they learn about wining, losing, discipline and team spirit”, continued Trinko Keen. “Those are things they will need finding a good place in society, their path will not be easy; sport can provide tools to give them the belief that they can be the master of their destiny and make it happen.”

Furthermore, there was a bonus for the children.

“I went to see the final of the team event with some of the children, invited by the ITTF”, continued Trinko Keen. “You had to be there to see what the impact being in the Olympic Arena had on these children; that was really great to feel, thanks so much to all who contributed.”

A must successful initiative, a most beneficial legacy has been created. 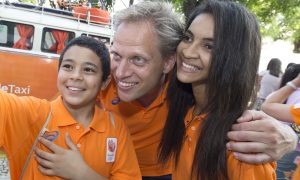