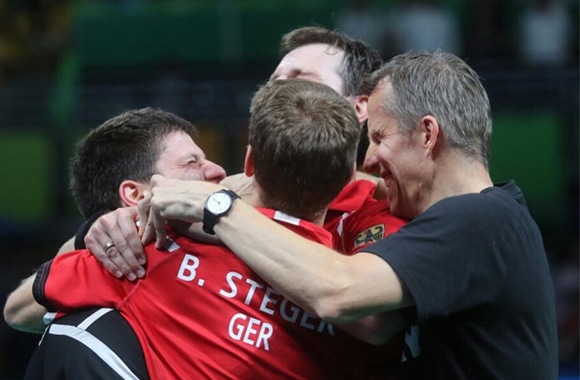 Both teams have both claimed team medals since Beijing 2008 when the Team event was first incorporated into the Olympic Games. In Beijing, Germany took Silver, while Korea settled for Bronze, it was the reverse case in 2012.

Korea Republic’s JEOUNG Youngsik caught up in a tight opening match against world number 24 Bastian STEGER in a five-games duel. JEOUNG survived the scare from the lower ranked STEGER, having to save three match points to finally win 3-2 (12-10, 6-11, 11-6, 6-11, 13-11) in the decider.

The world number twelve was having the tournament of his life at the Rio 2016 Olympic Games, putting up a strong fight against eventual Champion MA Long (CHN) in the Singles event, and coming close to defeating Grand Slam Champion ZHANG Jike in the Team semifinals encounter between China and Korea Republic.

Losing his Singles match, STEGER teamed with former world number one Timo BOLL to play against Korean pair of JEOUNG and 2013 World Mixed Double runner-up LEE Sangsu. Suffering from a dislocation of a bone is his neck following a bad fall in the match, BOLL came back to the court after having pain killer injections during the injury time-out. The German pair eventually prevailed 3-2 (9-11, 11-6, 11-7, 9-11, 11-9) in the thriller.

“Oh my god. Such a thriller. First game was so exciting. We had to keep on believing we could win,”Â stated the German flag bearer at the Rio 2016 Opening ceremony. “I had an injury during the doubles, and had to take injections in the injury break. My mind was focused on just keeping the ball on the table. It was a team effort, we had great spirit.”

The world number thirteen added “I was in a lot of pain, and I was scared I could not play in the singles. Injections helped a lot. In the end, it was very nice to get the medal.”

“It is a great feeling as you never know if it’s your last game. Emotional win. Could be last Olympics as you don’t know what happens in the future. Tokyo is a long way away!”

Claiming Germany’s second table tennis medal in Rio, after the German women’s team clinched Silver last night, OVTCHAROV shared “No one expected we can do it. Three medals in a row, we did it for Germany.”

“Bastian played the match of his life, we were shock when he lost. I said I had to do everything for the team. Thankfully, Timo played brilliant in the end.”