In recent times there has been considerable speculation that the Rio 2016 Olympic Games would be her swansong; at the Qoros 2015 World Championships in Suzhou, she stated that her time as a member of the Chinese National Team was coming to a close.

Notably at the press conference which followed the Women’s Team success in Rio de Janeiro, the speculation increased; later in the evening on her Weibo account, which is a hybrid of Facebook and Twitter, the 28 year old announced her retirement but did not totally close the door.

Loyal to the call of the country, she indicated that, should she be required for the national team then she would respond. However, with the embarrassment of riches in the Chinese camp; that is most unlikely.

“All good things come to an end, thanks to my country for nurturing me; I have also done my best to repay my country, completing my final task for the national team. It’s with some reservations that I retire but it’s for a better future. Life can’t be always sweet and I’ll face my retirement with a smile. Thank you table tennis for everything that the sport has gave me.” Li Xiaoxia

Ding Ning and Liu Shiwen have undoubtedly one more Olympic Games left in the locker, Ding Ning at 26 years of age being one year older than Liu Shiwen.

Now waiting in the wings to fill the shoes of Li Xiaoxia is Zhu Yuling, followed by Chen Meng and if Kong Linghui, the Women’s Team National Coach, is concerned then he can always send for the bodyguard. He can select Wu Yang, the player who loses to members of her own team but not to those from foreign shores.

It was at the inaugural World Junior Championships staged in 2003, in the Chilean capital city of Santiago, that we first set eyes on Li Xiaoxia.

She completed the tournament with gold in three events, the one to prove elusive being the Girls’ Singles crown.

In the final of the Girls’ Team event, she was the pivotal player, she beat both Sayaka Hirano and Ai Fukuhara to guide her colleagues, Peng Luyang and Li Qian to a three-one success. Later she won the Mixed Doubles event with Zeng Cem, who subsequently moved to Turkey; also she clinched the Girls’ Doubles title in partnership with Li Qian.

“Four years have flown past, I have experienced a lot in the fast four years, there were moments I felt wronged, proud, wanting to give up, and disappointed. My injuries have caused me a great burden, the pain I have experienced daily is unbearable, I could cry. I made it to the end.” Li Xiaoxia

Gold but not in the Girls’ Singles competition; she was beaten at the semi-final stage by Li Qian, the champion elect.

Notably Li Qian never progressed to greater heights; she was a left handed shake-hands grip attacking player, not the Li Qian who is the right handed defender who now plays for Poland. Also there is one more Li Qian, the 2014 Women’s Singles Class 3 World Para champion.

A quartet of promising players but it was to be Li Xiaoxia, who learned her skills in Anshan, Liaoning Province, a hotbed of table tennis, who was to make the most progress.

In 2006 she made her World Championships debut in Bremen; the same year she reached the title deciding contest in the Women’s Singles event at the ITTF World Tour Grand Finals.

Results only the precious few achieve and there is much more to merit the number one tag.

“Thank you to those who have pushed me, thank you for being by my side to support, accompany and grow together. Please remember the positive energy Li Xiaoxia has brought about on and off court. I hope you will continue supporting our national sport and wish that our team achieves more glory.” Li Xiaoxia

She was a member of the successful Chinese outfit at five World Championships; she won eleven ITTF World Tour Women’s Singles titles, whilst forming a most successful Women’s Doubles partnership with Guo Yue.

They won the Women’s Doubles title at three consecutive World Championships starting in 2009 in Yokohama. Additionally they completed eleven such achievements on the ITTF World Tour and twice won at the Grand Finals. They succeeded in 2007 in Beijing and in 2011 in London.

A host of titles for a player who had a clear goal, at the 2003 World Junior Championships when matters had concluded she was most clear “this is only junior, what is important is the World Championships, I want to be World champion!”

“As a member of the party (Communist Party of China), the honour of our country has the utmost importance, if the team needs me back, as long as my body condition allows and that my family supports me, I will sure make my return back to this honourable team.” Li Xiaoxia

Furthermore she bid farewell standing on the top step of the podium, standing on the highest step of all, the very pinnacle, the citation doing justice to her outstanding career, the supreme accolade: Li Xiaoxia, gold medallist and Olympic champion. 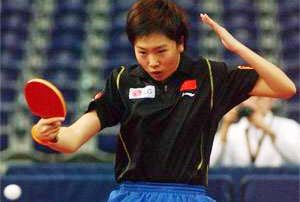 Li Xiaoxia in action at the 2003 World Junior Championships, nothing changes, the technique the same throughout forthcoming years