The Chinese women's team have successfully defended the Gold title they earned four years ago in London, to clinch another Gold for China's medal count, crushing Germany 3-0 in the final. 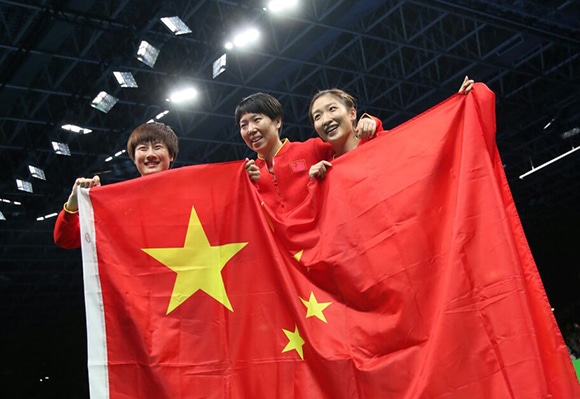 LI have shared earlier “The Women’s Team final might be the last time I’m representing my country to compete. My goal will be to win, but the most important thing to show my best self on court.”

The 28-year-old has not dropped a single game since the Team event started, and even in the Singles event, the Singles Silver medalist has only dropped four games to the eventual Champion DING Ning (CHN) throughout the entire Olympic Games in Rio.

Missing out on the Singles event, world number one LIU Shiwen (CHN) was on task to stamp her authority in the team event. The four-time Women’s World Cup Champion gave no chance for Petrissa SOLJA (GER) to fight back, defeating the world number fifteen 3-0 (11-3, 11-5, 11-4) to give China a 2-0 lead for her first Olympic Gold.

LIU joined forces with Singles Champion DING Ning (CHN) to face German pair of SOLJA and SHAN Xiaona. The German duo put up a brave fight, but the combination of the world number one and two proved too strong for them, and China prevailed 3-1 (11-6, 11-5, 9-11, 11-7) to seal the victory in the Gold medal match.

Winning her first Olympic medal in Rio, an excited LIU shared “It’s a dream for everyone to win an Olympic medal, so this is perfect.”

DING added “We are a team so we do everything together and trust each other. Sometimes at this level we don’t think we just play.”

Despite losing the Gold medal, Germany has secured the Silver medal, which is Germany’s first Women’s Olympic Table Tennis medal, and first for Europe since Seoul 1988.