The Chinese pair of world champion Ma Long and the defending Olympic champion Zhang Jike will do battle tonight to be crowned the Rio 2016 Men’s Singles Champion in a battle of the titans in Riocentro 3. 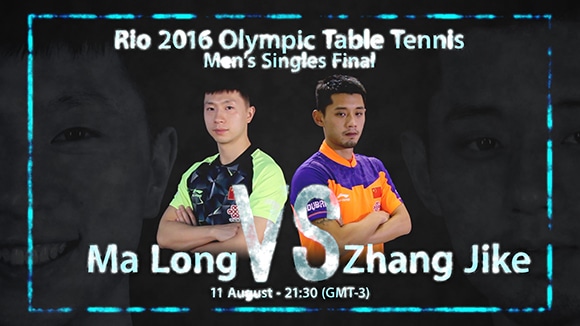 After winning the first 3 games comfortably 11-5 each, the top seeded Chinese lost the next two to MIZUTANI 7-11, 10-12 respectively, before he could seal the sixth game 11-5 for a 4-2 victory over the world number six.

Looking to earn the Olympic Singles Gold in Rio to achieve a table tennis Golden Grand Slam, MA said “I am very happy as this is my first Olympic finals. It was a difficult match particularly in the last 3 games.”

“Making the finals is extremely meaningful to me as this is the dream for all athletes. I’m looking forward to it. My opponent will be the strongest in the world, and I don’t want go into the match with any pressure.”

The other semifinals match was played between MA’s teammate ZHANG Jike (CHN) and former world number one Vladimir SAMSONOV (BLR).

Suffering a rib injury from his quarterfinals match against current European Champion Dimitrij OVTCHAROV (GER), the 40-year-old legend was sent to the hospital for treatment and evaluation of his injuries after the epic match with the third seed on 9 August.

After a day of rest and a dose of painkillers before the match against the two-time World Champion today, the Belarussian put up a good fight against the defending Champion, missing the first 3 games by a minimal two-point margin, and taking the fourth game 11-6.

“I think I played pretty well in the semifinals. It was a close match, but I think I’m faster and had an advantage. Tonight, I hope that I can play better and win. One more match!” shared the defending Olympic Champion.

SAMSONOV shared after his defeat, “Of course I am disappointed, it was very close in the second and third game. I had my chances. In the last game I was waiting for Zhang to make a mistake but he did not. I’m going to relax now and prepare for the bronze medal match. I hope to win tonight.”

SAMSONOV will now face MIZUTANI to fight for their first Olympic table tennis medal for their respective countries at the Bronze medal match tonight at 20:30pm local time.

The Gold medal match tonight between ZHANG and MA is expected to be one of the most spectacular of all time, with 2015 World Champion and 2015 Men’s World Cup Champion MA aiming for his first Golden Grand Slam title, and ZHANG fighting to achieve his second Table Tennis Grand Slam.

MA may have a better head to head record of 11-6 over the reigning World Champion, but it was ZHANG, whom Chinese netizens call as “born for the big stage”, who generally does better in major tournaments like the Olympic Games.

ZHANG also expressed that “The previous matches are fought for my country; the Final is for myself.”

Tonight in Rio, the world will find out who will emerge as the Rio 2016 Olympic Men’s Singles Champion.